Fuse33 is a community makerspace where people can come in and build pretty much anything they want. 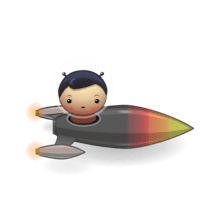 ##Depicting a very limited rendition of the u.s.s. Enterprise NCC-1701-d, because I couldn't figure out how to do the site-restricted Google search (keeps saying server not accepted)

##Limited depiction of a CNC-router-engraved figure eight (hard to see because, well, it's in big part in my imagination)

Anyway, I finally figured out how to use wikipedia images, so here's what Fuse33's electronics area sort of looks like:

Fuse33, along with Protospace, are two similar makerspaces residing in a city that looks like this (easily identifiable by the tower on the left):

Let's close with some enticing links, shall we?

Let me just imagine you nodding you head for a moment...

I know I know, not a nodding head... But I couldn't find any on Wikipedia, so yeah.

Here are links to some makerspaces/hackerspaces found around the globe. Find one near you!